Chris Lumb graduated from the University of Waterloo with a Bachelor of Applied Science in Engineering in 1982. He moved out to Alberta in 1993 to work as a senior consultant with Gellman Hayward and partners and subsequently became a Department Head at the Alberta Research Council. This firm footing in the dynamic Alberta research community made him an natural choice to become CEO of Micralyne, a young company doing pioneering work in MEMS.

At Micralyne, Chris was involved in all aspects of the company’s development, moving it from a not-for-profit operation run by the University of Alberta to a privately held commercial company with annual revenues today of more than $28 million.
As Micralyne emerged as one of the leading technology firms in Alberta, Chris also contributed generously to the formation of a national industry. For example, he joined the Board of Directors at CMC in 2000 and chaired it and continues to serve CMC as a director today. He is also a director of CANARIE.

Chris left Micralyne in 2009 to become CEO of TEC Edmonton, the technology transfer office for the University of Alberta. It is the region’s largest incubator for early stage companies. 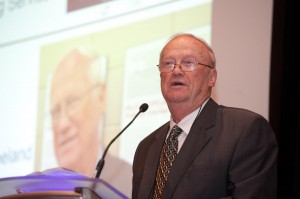 The second Outstanding Service Award went to a distinguished engineer, researcher, innovator and educator who built a stellar career at Carleton University.

Miles received his BSc in Electrical Engineering at the University of Manitoba and then received his Masters and Doctorate from the University of Toronto. He started at Carleton University in 1965 as an Assistant Professor in the Department of Electronics. He served Carleton’s Electronics Department in an array of roles including professor, chairman and distinguished research professor. In addition to teaching two and a half generations of electrical engineers, Miles made a profound contribution to building Carleton’s research capacity in the area of analog and radio frequency integrated circuit design. He also worked on developing computing techniques to enable and reinforce research and teaching in this area.

Miles was also very active in consulting and in research collaboration with industry serving Nortel, BNR and GE among others. Miles is a research innovator.

Over his distinguished teaching career, he supervised nearly 50 masters and PhD theses (including those of some present in this room) and has himself authored over 70 papers.

Throughout his career, Miles has been active in both the IEEE and CMC. He was made a fellow of IEEE in 1989.