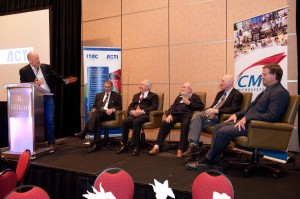 To mark the 20th anniversary of the Executive Forum on Microsystems, ITAC and its conference partners assembled a five-person panel to reflect on two decades of microelectronics growth and speculate on what may lay ahead.

The panel included industry leaders, each of whom has previously been recognized with the ITAC’s Outstanding Service Award.

The panel
• Dr. Savvas Chamberlain: Founder of DALSA. He led the company through nearly 30 years of robust growth.
• Dr. Adam Chowaniec: He led the team responsible for the creation of the Amiga personal computer and later became the founding CEO of Tundra Semiconductor Corporation. He has served as chair or director of many corporations including Bell Air Networks, Zarlink and Microbridge.
• Dr. Richard Foss: Co-founder of MOSAID.
• Gord Harling : A a serial entrepreneur, still dedicated to building technology ventures. He works for the City of Sherbrooke as director of Economic Development for ICT, Microelectronics and Nanotechnology.
• Dr. Ian McWalter: President and CEO of CMC Microsystems.

Savvas: Speed was the key to his success. He saw that slow processing was a challenge for the industry and he developed a device that was 50 times faster than anything on the market. Key message: You need to have a clear understanding of the problem you want to solve.

Richard: An accidental Canadian, he came for six weeks to help in the design of a memory chip and he never left. Interesting work and talented colleagues made his work interesting and his design talents flourished. Key message: Surround yourself with good people.

Savvas: It’s close to North American and European markets and it was a good place to raise kids. While it is has a brand of capitalism that supports the free-market of ideas, it is not a punishing capitalism like in the US or Europe. It’s a capitalism that is good for the middle class and the underprivileged.

Gord: There’s still a passion for the industry. People are still excited by technology. With the declining number of hardware businesses the sesns of community has been lost, but there are still interesting individual initiatives.

Adam: The opportunities to use technology to reshape the world are just as powerful today as they were 30 years ago. With fewer resources available for start-ups, and less government strategies to support growth in place, the challenge is making the jump from a small or mid-sized company to the $100 billion firm.