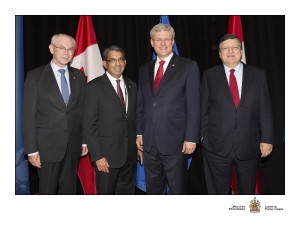 Energized by the successful conclusion of the Canada-European Union Comprehensive Economic and Trade Agreement (CETA) negotiations, the Information and Technology Association of Canada is expanding its trade lobbying efforts focused on Asia.

Karna Gupta, ITAC’s President and CEO, announced this week the industry association has joined other industry leaders to push for the conclusion of negotiations to significantly expand product coverage of the Information Technology Agreement (ITA) now before the leaders of the Asia-Pacific Economic Cooperation (APEC).

“We have been long time backers of the effort to get the CETA deal completed. We were among the first business organizations to join the Coalition for Canada-EU Trade, and we are now among the early signatories to a further initiative pushing for the ITA,” says Gupta.

“These ITA negotiations have been stalled for nearly a year. The time is now to finally conclude this critically important tariff-elimination initiative.”

The ITA negotiations began in 1996. For the past several years APEC leaders have repeatedly called for their conclusion, a move that would help restore confidence in the World Trade Organization.

Product expansion of the ITA, as well as expansion of geographic scope of the agreement would yield immediate and substantial benefits, removing tariffs on a vast array of tech products. ITA expansion would bolster innovation, accelerate productivity, create jobs, lower consumer prices, and bridge communities across the globe.

As a signatory to the Global Industry Statement on ITA Expansion, ITAC is urging all parties to use the next round oset for Manilla in November and get the deal signed.