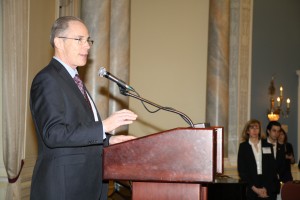 Lloyd Bryant announces the creation of the ITAC Women on Boards Registry in Ottawa.

A new initiative that will help ensure improved gender diversity on corporate boards in the technology sector was officially launched February 24 in Ottawa.

The Information Technology Association of Canada (ITAC) is creating a registry for women in the ICT sector with the experience and skills to sit on corporate board of directors. The registry is designed to make it easier for ICT companies to tap into the impressive pool of female talent already in the industry.

“In companies where more than three women sit on the board, the ROI is 18 per cent higher than those boards without women,” he says. “Our new Women on Boards initiative is just good business.”
The need for the registry is urgent. Of the approximately 200 publically traded Canadian technology companies, more than half have no women on their boards.

Project lead Mary Whittle says historically the number of women on boards in the ICT industry has hovered at 15-20 per cent. The goal with the registry is to move that percentage to 30 per cent within two years.

A 2013 study commissioned by ITAC found Canadian ICT companies attributed the small number of women on board of directors to the fact that they did not have many women in their network and, as a result, didn’t know where to look for qualified, interested women.

The Women on Boards initiative will create a database of technology experienced women, vetted through Amrop Knightsbridge’s Board Practice, who are interested in board leadership positions.

“There are women who are perfectly capable to sit on boards now, but they haven’t had the same exposure as their male colleagues. By creating and promoting the data base, qualified female names will be front and centre when boards go looking for new members,” says Bryant.

The registry is timely given the new TSX “comply or explain” regulations, he says, and can serve as a valuable resource to interested ICT companies.

As part of the initiative, there will be a mentorship program for younger women moving through the ICT ranks that will ensure they have the opportunity to learn about the skills required, opportunities and importance of board membership.

“Some senior women now realize if they’d thought about board membership as a goal, they might have taken different jobs throughout their career that would make them more valuable,” said Whittle.

The registry was announced in Ottawa following a day long visit by senior industry leaders to Parliament Hill for discussions with politicians and bureaucrats. Status of Women Minister Kellie Leitch was present for the announcement.

Ms. Whittle expects the registry will have 30 accredited candidates by Summer and at least 50 by the end of the year following more information and governance accreditation sessions.